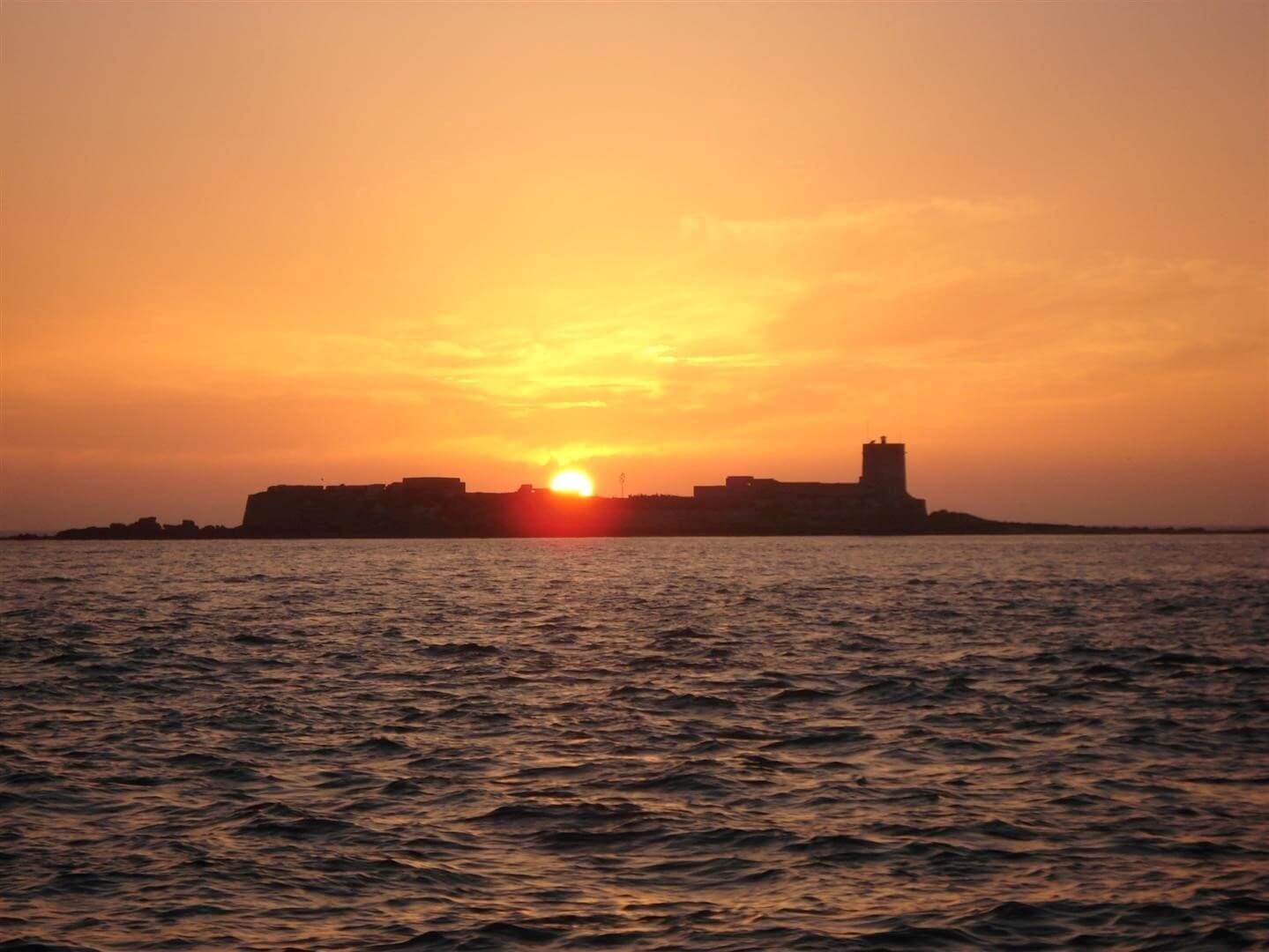 The province of Baetica was for Rome a strategic place in its extensive trade routes. Garum was then a food as appreciated as wine and oil are today but it was forgotten over time. This fermented sauce of fish viscera (it doesn't sound too appetising, right?) was considered a strong aphrodisiac (okay, now everything makes sense). And what will Baelo Claudia have to do with garum? Well, a lot. The small town that lived for the production of this sauce and salted fish for the metropolis.

When you get to Baelo Claudia you will understand its close link with the ocean. These ruins are literally steps from the splendid Bolonia beach. It is well worth a visit to this site and its visitor centre (open every day except Mondays). In addition, admission is free for all citizens of the European Union. Strolling through these second century BC streets you can still see clearly the amphitheatre, temples, hot springs and even the factory where the garum was made. And some nights, classical theatre under moonlight, with the sea in the background and stars in the sky.

Walking and beach makes us hungry. We suggest you go in search of another of the delicacies of our land, cheese. Very close to the ruins you will find the El Cabrero de Bolonia cheese factory, a married couple that makes entirely handmade curds and whose fame is beginning to spread like wildfire. If you are interested in buying their products and it is not July or August, it's best to call them to ask for their opening hours. We have another recommendation. To find the best loin with lard of the whole province, you have to go to Pinto inn, at La Barca de Vejer. Is it worth it to take miles to eat a delicacy from another planet? Try it and then tell us. 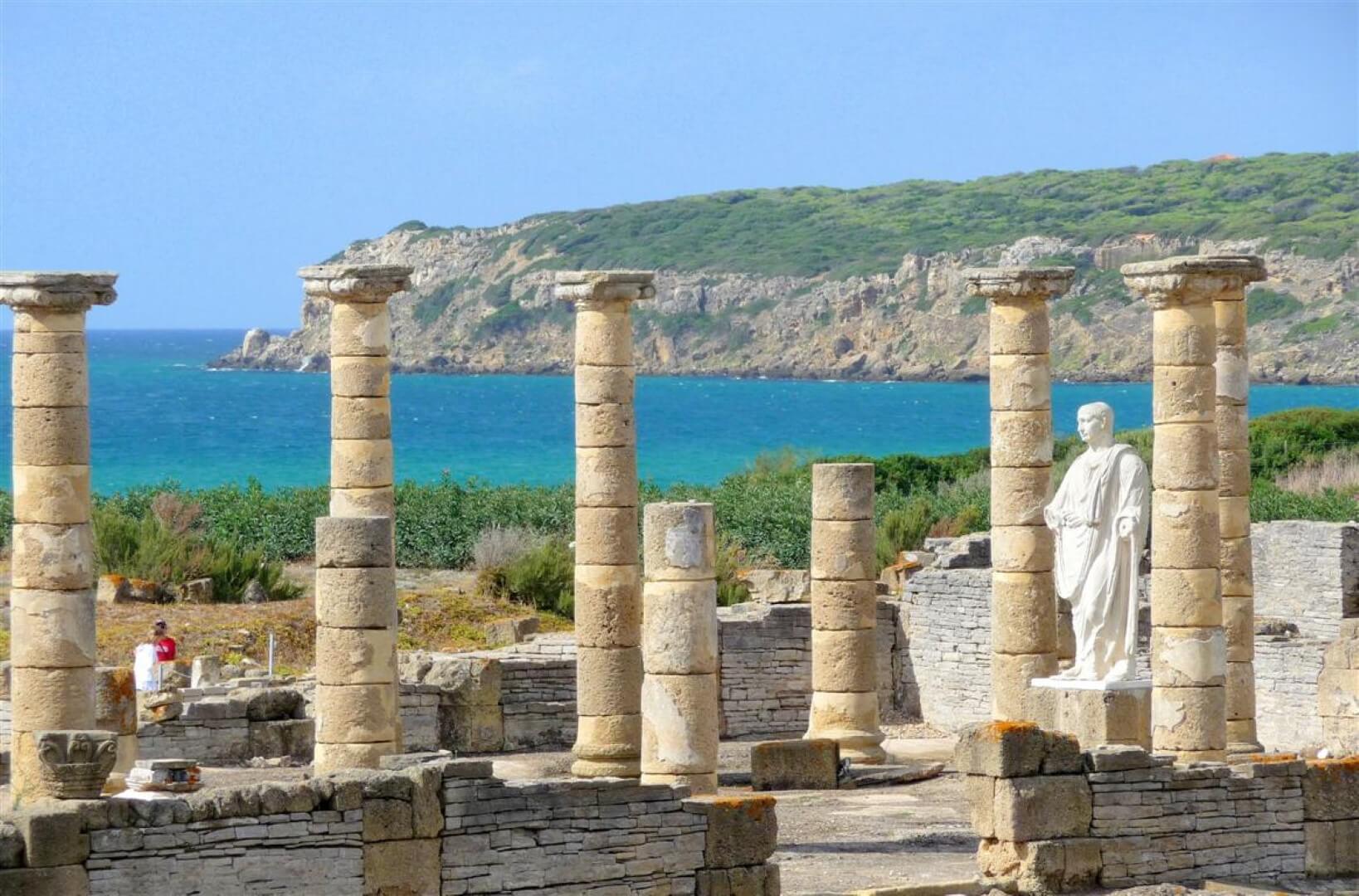 Get on the car that we keep tracking the ancestors of these lands. Drive west towards the Sancti Petri marina, in the municipality of Chiclana de la Frontera. Look over the horizon. Do you see the islet? Our objective is the one with a major fortification. If you are curious and want to disembark on the island enter www.elcastillodesanctipetri.com because they also have a lot of activities.

To get there you can do it, paddling or hiring one of the boats that connect with the island, in kayak for free or with guided tour. The history of this place deserves that minimal difference.

On summer nights www.albarco.com leaves the old town of Sancti Petri to see how the sun falls around the silhouette of the castle and slowly sinks into the sea.

Although almost nobody remembers, there was erected the most venerated temple in the West. First with the Phoenicians in honour of the hero Melkart, who with the arrival of the Romans became a place for worshipping Hercules. In fact, it was believed that he was buried there. So important was the temple, that they built a walkway connecting it to the mainland that is now under water due to the erosion of the sea and weather.

Later times were less mystical. What we see today is a castle that started in the 16th century and was completed in the 18th century. Their batteries spit fire on pirates, English and French. During the War of Independence, Cadiz resisted the Napoleonic invasion and that castle was bombarded mercilessly with a heroic defence by those posted there. After the war, this piece of land could finally rest to house an innocent lighthouse and its castle. 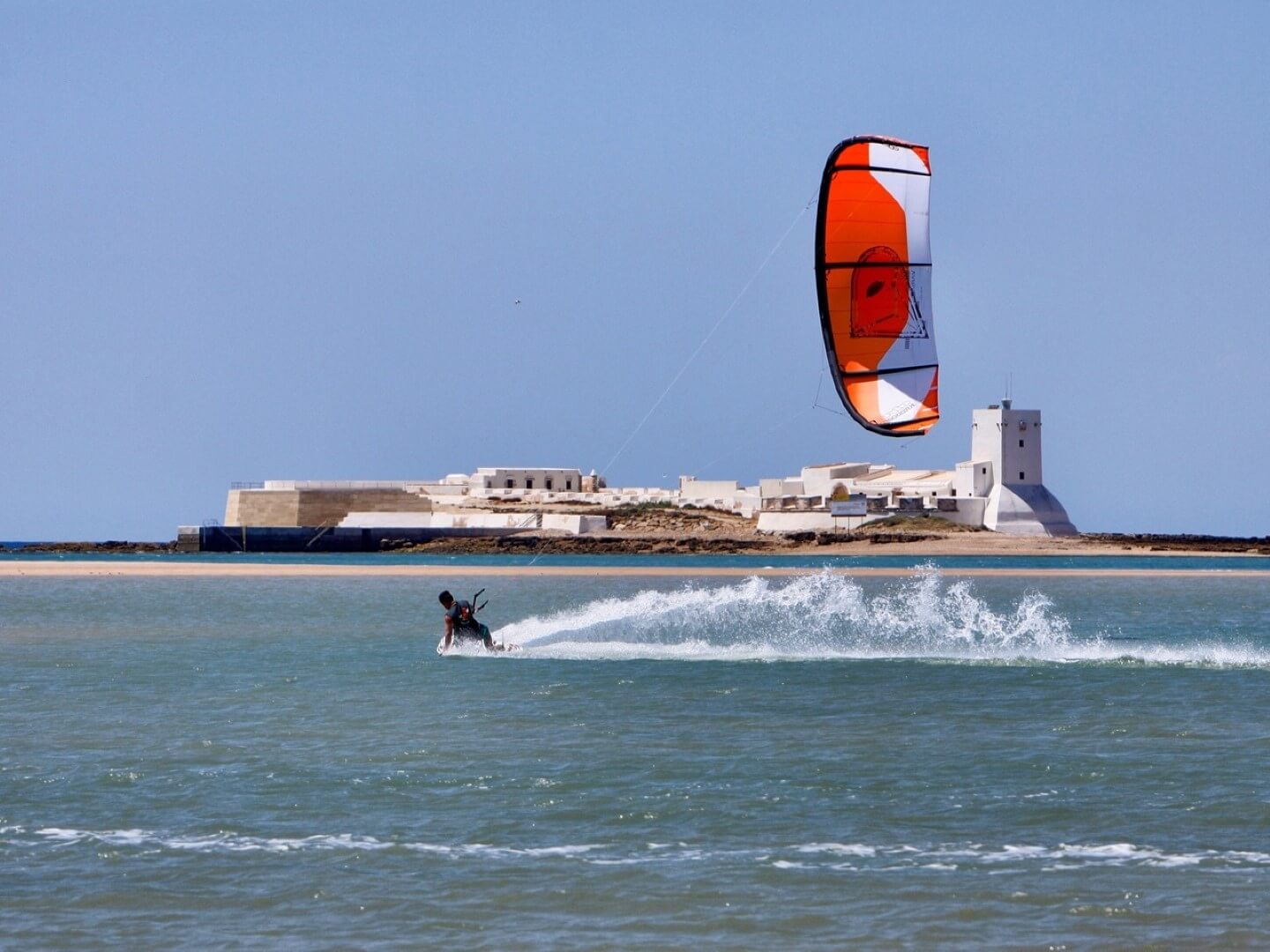 At this point, the sun will be very close to completing its daily cycle. A place specifically recommended by locals is to go see the sunset at the hermitage Ermita de Santa Ana, on top of a hill. There you can only contemplate the play of lights on all the surroundings: countryside, cities and sea. Relax.

If you want to end the day with a dinner next to that sea full of glories and dramas, the chiringuitos are a good alternative. To enjoy the fruits of the sea, el Rincón del Pulpo is also interesting for its quality and price.

Chiclana has a huge range of accommodation and it is very difficult for us to decide on one. Enter the province's official tourism website to full range of available accommodation. 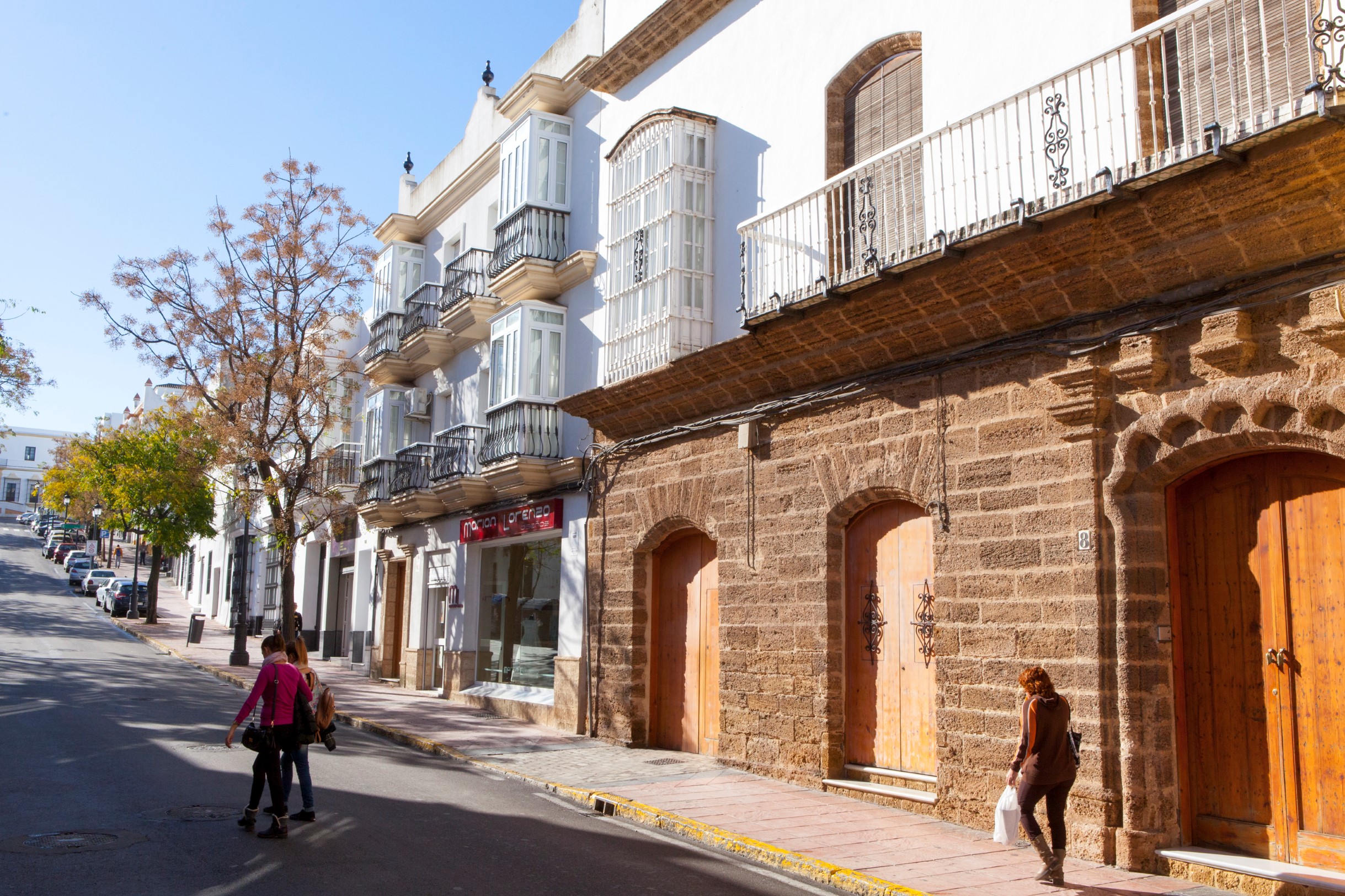 Did you sleep well? Recover your strength with a good piece of toast with whatever you feel like and put Rota in the spotlight. There awaits you an ancient fishing technique that will leave you speechless. No, it's not the tuna fishing. It is about the pens, walls made by man inside the sea so that the tides bring the fish that will be trapped in them. Ingenious, is not it? It's not clear to whom we owe the idea, but it could be Roman or even earlier. These sea walls are made with flakes of oyster stones compacted with a foundation called zapata.

To see them we recommend you go west of the Los Corrales beach. Obviously at high tide you will not see anything special (that's what it is, that fish enter the pens that those who then, at low tide, cannot escape!). So, check the tide tables to see when the fish will be surprised, and the fishermen gladdened. We suggest you organise a guided tour of the pen by contacting the tourist office of the Rota City Council.

At Rota we suggest you try the mayetito, the classic Rota sweet has a sponge base with vanilla and cinnamon, toasted yolk, a touch of chocolate and almonds and pumpkin. A nod to Rota vegetables and its mayetos, the gardeners who took care of it. You can find it in the city's confectioneries and take it as a gift. And, since you are in the centre, take the opportunity to wander to Luna Castle, from the 13th century. It is worth paying the two euros of the entrance to see its splendid central courtyard.

After seeing the castle, you will want to end the day like a king. In the hotel Playa de la Luz, between dunes and a leafy pine forest, or in the hotels of Costa Ballena you will find all the comforts you could wish for. Smile and rest. All stories have an ending. This story undoubtedly has a happy ending. 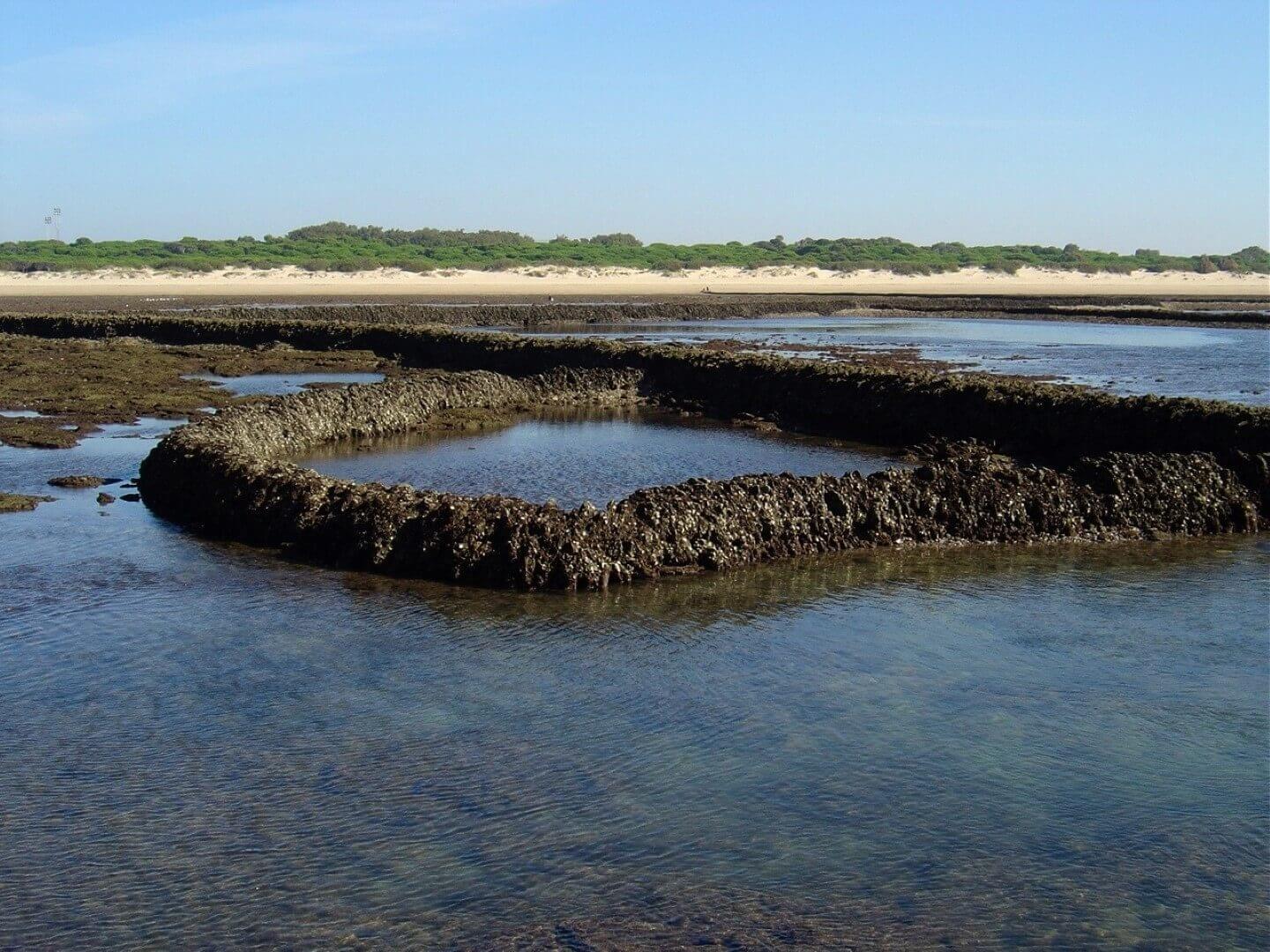 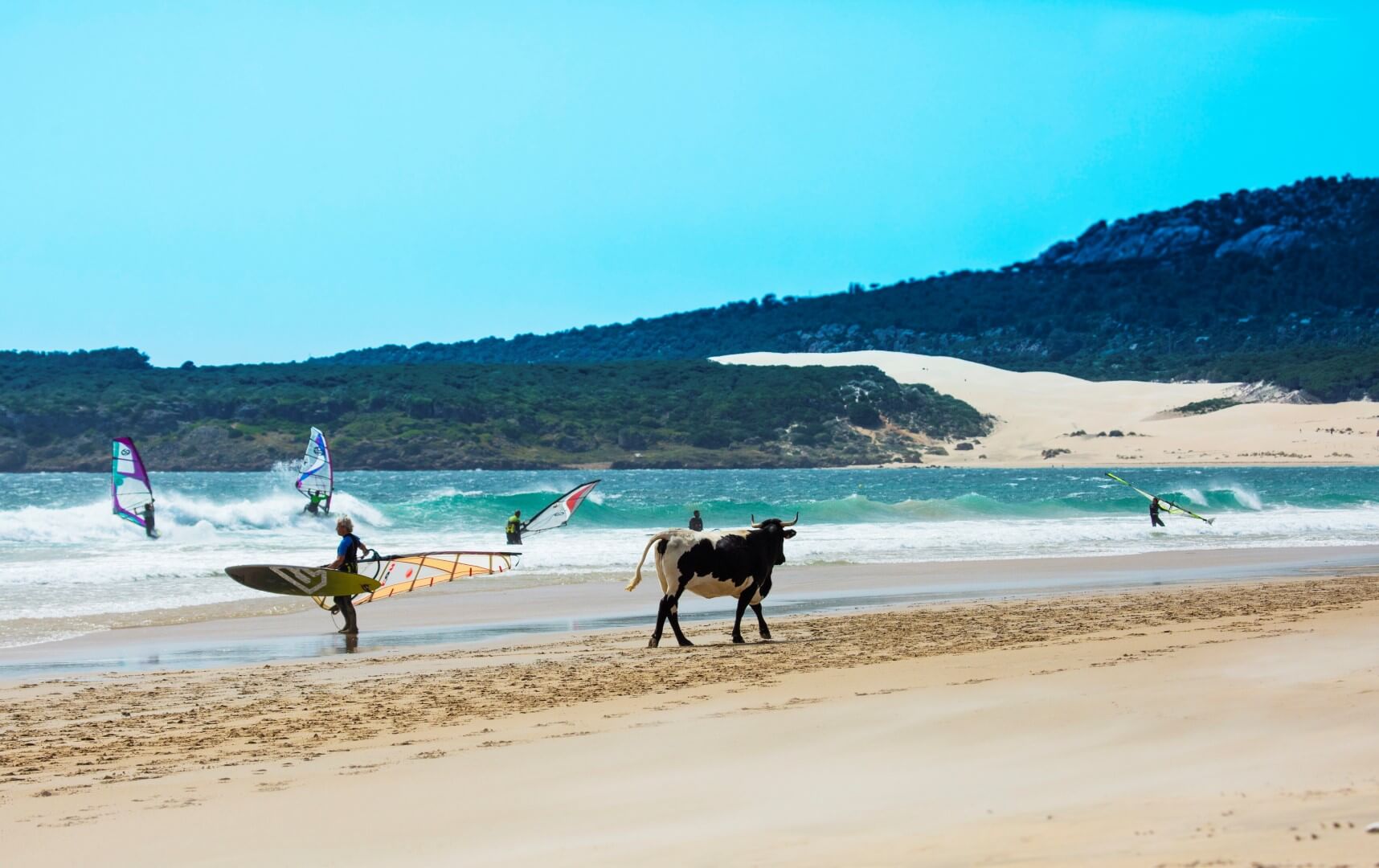